Shawn Guffey of Tompkinsville was appointed to serve the unfilled term of Monroe County Property Valuation Administrator this past week, with the order effective Feb. 24.

Guffey will serve until an election can be held to fill the term left vacant by the early retirement of Louis Lee Carter.
In an executive order signed by Governor Andy Beshear, Guffey was selected to fill the seat. According to  Martha Tapley, of the Kentucky Department of Revenue, members of her staff will continue to serve as Interim PVA until he begins on Feb. 24.
Guffey, the son of Carolyn (Baskett)  Crowe of Tompkinsville, and late Kenneth Crowe and Roger Guffey, is married to the former Beth Rowland and they have two children — Hannah (who is a graduate student at Belmont University) and Leigha, who is a senior at Monroe County High School.
A Monroe County native, he is a member of the First Baptist Church and presently works for Hospital Corporation of America. He is a graduate of Tompkinsville High School.
He began his working career at the Monroe County Medical Center, where he worked for the radiology department for 15 years, and served as the Radiology Department Manager for 11 years.
Guffey will face challengers Melissa (Bowman) Collins, Steven Dale Lyon, Jeremy Monday and Nelson Goad as Republican candidates on May 19. Democrat Brad Baxter has also filed for the election.

HOMEMAKER INTERNATIONAL NIGHT TO BE HELD 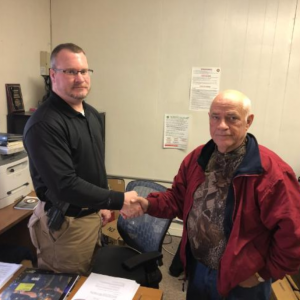