By: Ricky Miller
Writers note:
I didn’t plan on it but I am — ironically writing this on the day that my daughter MacKenzie is in Nashville to take her RN nursing exam. As parents we can only hope our children choose a path-of-life that is one in which they are well-suited for, and will be rewarding. I believe I am 2-for-2 and “batting” a thousand on those variables.
It doesn’t take long in life for “we the people” to be attended to, and cared for by men and women of the nursing profession.  Two such ladies’ memories are special in my mind, one of which I know much better than the other. One of them I literally owe my life to.

Sharon Ritter McDermott
With a sister graduating with Sharon, I knew of her through Joyce enough to know/ recognize her when I would see her in the halls of the Gold Bricks. Actually I was in eighth grade with all classes on the bottom floor with the upper classes on the upper two floors. I still found time (and excuses) to venture up to the “promised-land” to mingle with and observe my elders. I knew what times the periods changed and tried to go north then, if possible. I actually being a “teacher’s pet” of the late-and -sweet Peggy Rush created some of these opportunities as she would select me to run errands to the Grider/Smith principals office and elsewhere.  It wasn’t long into the fall of ‘66 when I spotted two girls dressed identically talking near the lobby where you can take the third floor stairs. Actually thought they were sisters… if not twins.
A month or so later, I saw them again and once more they were in matching outfits, these different from the previous wardrobe.  When I finally quizzed Joyce, she told me who they were and they were not sisters. From that time on when I would see Sharon (Dovie’s was a typical spot) I would know and recognize her as one of the ‘Bobbsye’ twins as Joyce liked to call Sharon and Carolyn Hurd.
Fast-forward 40 years or so and that ‘67 grad became a more special person in my life. Following an ill-fated brush pile burning (I found out the hard way that several-years old diesel can separate and become gasoline-level flammable) I got a pretty good roasting and made my first trip as a patient to the MCMC for a visit. She was my nurse and I will never forget her care and compassion. That was especially noted as she winced with me on the daily removal of scorched and dead skin which she did several times while I was there.  I guess she quickly had observed the low threshold of pain I possessed. Further treatments called for a Glasgow TJ Samson visit where she not only called to check on me, but also made a personal visit. After her passing, I was glad I had got to know her better and could see that her choosing the nursing field was a great decision for me and many others whom she provided special care and comfort to.  I’m sure that loving assistance was returned to her by fellow nurses and healthcare specialists as she battled her cancer.

Jo Ann Strode
While in my senior year (fall of ‘70) I contracted a double malady, somehow getting mono at the same time with a roaring strep throat. It fueled a sky-high body temperature that reached 105 degrees which came down but still hovered near 102 degrees for a day or so.  Dr. Jimmy made some calls and was told that a combination penicillin/terramycin IV had recently been successful in combating lingering fevers. I had taken both through the years but apparently the combination was toxic to my system and I barely remember Ms. Strode saying, “it’s the drip” and began undoing it and calling for Adrenalin. I awoke in an ambulance at Parkview Hospital in Nashville and soon found out from the doctors there how that allergic reaction about claimed me. “Another 45 seconds to a minute would have done it,” my doctor told me.  It was Thanksgiving Day and was truly a day of thanksgiving for me. God bless the memory of Jo Ann.

The Class of ‘67
“Summer in the City” by the Spoonful was the number one hit when they started school in August and “Groovin” by the Rascals topped the charts when they walked the diploma line in late May.  Florence’s Café,  Dovie’s and Ma Clark’s Tastee Freeze battled for the food dollar with Frank Williams’ small eatery and the Grandview Drive-In Restaurant trailing behind. Florence’s dive fared well as it had the best jukebox in town. I’m sure the City Café on Main was still in business also.  Alex Tooley and Paul and Nora’s had the monopolies on the bar-b-q business, a much coveted meal selection, both then and today.
Athletically both main sports of basketball and football narrowly missed out  on playoff advancements as heart-breaking endings short-circuited each season.  Upon further (sports) review, I find it so hard to believe that a football class that included Sug Starnes, Joe Howard Miller, Heepie Marrs, Larry Copas, Johnny Ramsey, Maxie Ross and Mike Kendall, never made the playoffs to this day. The KHSAA only allowed district winners to advance in those years and one touchdown losses to Glasgow (65) and Campbellsville (66) kept two of Tville’s best teams out of the post season. Two of the Bears advancing teams (67 and 69) also kept home capable Scottie and Eagle teams.

And about the season ending loss to Metcalfe in the basketball district?  Suffice to say that those of us who were there will never forget that games conclusion.  Joe Howard and Sug were the only two seniors that March night as both coaches Prentice Stanford and Jerome Taylor have passed on.
January of ‘67 also marked the passing of former THS basketball coach John C. Marrs in that tragic Gamaliel Road auto accident. Duly noted along those lines is that – with the recent passing of Tony Gumm – only two former Bear roundball coaches remain: Les Foglesong and Russell Van Zant. No Gamaliel Tiger coaches are still alive. 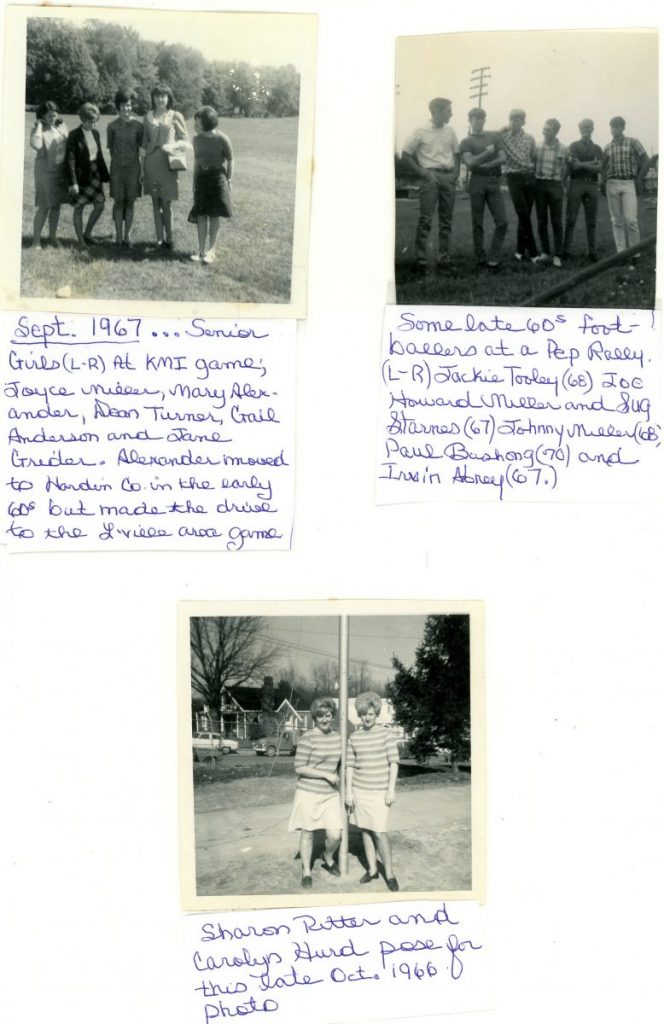 Note from the City of Tompkinsville (City Hall) Battle of the Bands held