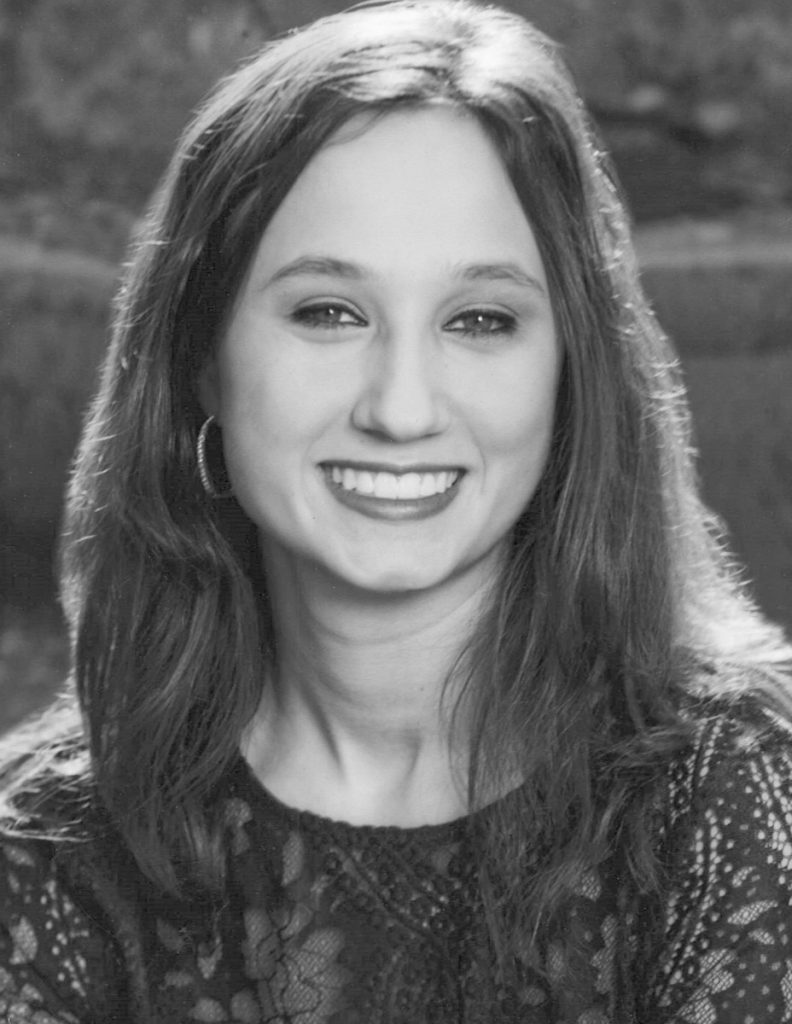 This article is dedicated to the memory of Leah Carter whose smiling face will be remembered by countless Monroe Countians for many years. With her parents being the late Kelly Carter (a T-ville Bear) and Laura Wallace (GHS Tiger), she was born a ‘bearcat.’

I recently met Kirk Eakle on the straight stretch from the Sam Hagan curve. Kirk is what I refer to as a hybrid—one who either went to GHS or THS for some of their high school years and finished up at Monroe County High School following the consolidation. As I looked in my rearview mirror I saw him slowly began to disappear into the curve and thought to myself; that pretty well identifies the old Tiger-Bear rivalry… it faded away.

Ironically, he was headed north toward my old Gold Brick high school and I was motoring toward his old locale. I believe his bricks were more of the traditional red clay hue.
The water-under-the bridge scenario of passing years probably hit me the hardest nine years ago when I pulled a MCHS annual off the shelf and noticed the front with its school emblem and the est. 1985. I quickly realized that a fleeting quarter-century had melted away since the black-and-gold and purple/gold were blended together to create the navy-blue Falcons. Although many of us Monroe Countians bemoaned the face that we had each lost our school/community identity, it soon became evident that this merger’s time had come. And don’t think for a second that the fact that both boys’ and girls’ Falcon basketball teams won district titles that first year didn’t help smooth this transition. The first edition of girls’ softball a year later saw those ladies win both district and SKAC titles against teams that had been playing the slo-pitch sport for several years. There’s been up-and-downstretches in athletics through the years, but the success of sports has been one of many more ”ups” as we rapidly finish out our 34th year of existence. Education accomplishments and graduation rate figures have likewise been in the top echelon of area schools. 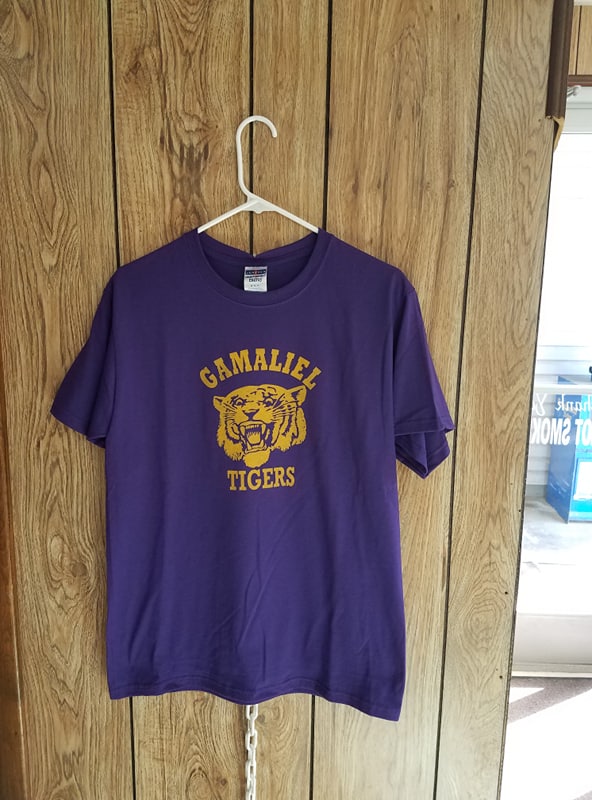 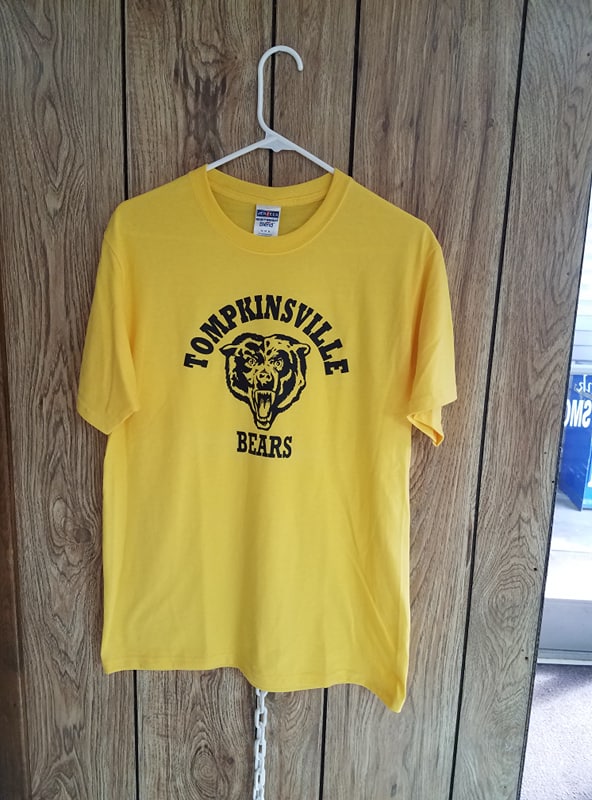 Feb. 15, 1985 saw the two schools play the last basketball games of the 77-year rivalry at Marrs Gymnasium in T-ville. The boys’ game saw what was, undoubtedly one of the biggest upsets in the intra-county history as T-ville (coached by Les Foglesong) won their first game of the year, beating Billy Murphy’s Tigers 73-66. Leading the way for the Bears were Darrick Proffitt, Kerry Tarter, Byron Graves, Paul Walden, Michael Kirk and sophomore Tom Heilman. The team finished the rebuilding year with a 2-21 record.
The south-side Tigers were a balanced well-rounded squad with Jeff Taylor, Tonie Brown, Jack Downing, Kevin Lee, Jim Arterburn and Todd Burgess logging the bulk of the playing minutes.
The roles were reversed in the girl’s game as T-ville’s seasoned team (coached by Bill McClendon) bested Sonny Oliphant’s Tigerettes by twenty in the last-ever girls’ contest.
The Lady Bears were led by Laura Hodge, Shelia Isenberg, Ginger High, Tracy Compton, and J. B. Heilman. GHS had Stacy Kirk, Melissa Emberton, Danetta Brown, Cheri Turner, Buffy Keith, Suzanne Napier and Rhonda Burgess play the leading roles in that final season.

In the middle of the year of a three-year stretch that saw Gamaliel and T-ville draw each other in the district, the Tigers of coach Tommy Downing beat John C. Marrs’ Bears in a game that was moved to Adair High in Columbia following a tornado hitting the Metcalfe gym just before the Monroe teams were set to battle in Edmonton. Several students from T-ville suffered minor injuries as the roof rose from its beams then sat back down sending debris down on arriving fans. Making All-District for the locals were Roger Kessler and Tommy Butler for THS and Tony Gumm, Mark Dossey and eighth-grader Terry Dunn for Gamaliel.

THE BEARCATS… AKA Falcons

With consolidation, a definite possibility in the foreseeable future, the late Billy Murphy, Sonny Oliphant and I often theorized that the perfect mascot for a new school would be that of the University of Cincinatti… the “Bearcats.” That was obviously a perfect blend of the two carnivorous animals of the schools. Alas, we weren’t consulted, but the Falcon has been a successful bird-of-prey for MCHS sports and has served us well for three and a half decades, flying to many victories.
Some of the THS/GHS marriage blends that come to mind are Larry Tim/Judy Ross, the late Jennifer Meyers and William Bowman, Steve/Danetta Wilson, the late Jane and Kenny Hurt, Perry Hume and “Doc Kim,” Jerry/Teresa Deckard, Kenny/Suzanne Hagan and Leroy and Nancy Geralds. A unique pairing occurred in the late thirties as Rockbridge neighbors Billie D. Bowman and Alicia Miller were wed a few years later after attending the competitive schools. This is due to the fact that the students were bussed from the north end of the county to give the newly created school adequate pupil numbers to meet state qualifications.
In lieu of the Bearcat moniker not being used for the school, I have thus proclaimed the children of these mixed-school marriages to be the Bearcats of our county. I know there are many more instances of these wedded pairs that have stood the test of time of past rivalrous days here in ‘Ole Roe.’ 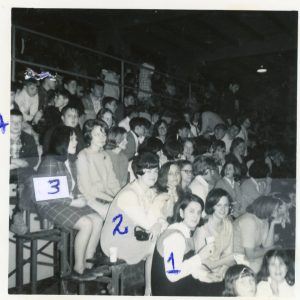 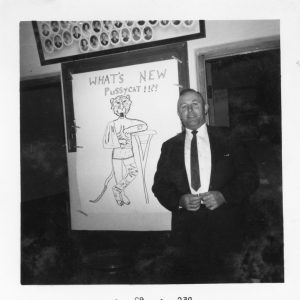 Longtime THS principal Randall Grider stands beside a hoped-for result poster before an upcoming game with Gamaliel. Tom Jones’ number 1 hit provided the basis of the poster’s caption. Alas, the pussy-cats prevailed by seven in the 1966 game.