As opening season for turkey draws near on April 16, it is also time to start hunting another elusive harvest – a mushroom that seems to appear overnight in the woods called a Morel. 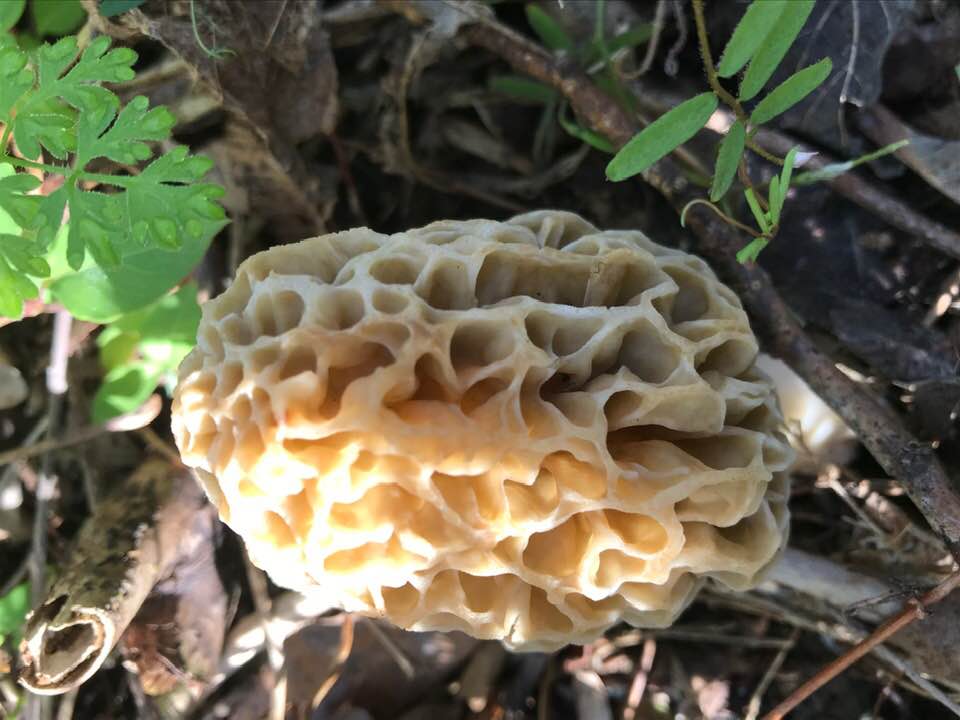 While turkey season is set by the government, the dry land fish season is set by mother nature and is affected by temperature, rainfall and the weather.
“It’s the perfect time,” stated Tommy Ferguson, as the rains cleared after a week of cold weather, and the sun popped out on Friday, April 5, “We should find plenty this weekend.
Yes, “Dry Land Fish,” another name for the Morel mushrooms, given the name due to the resemblance of a fish when they are sliced lengthwise and fried. The popular mushroom has become a delicacy not only in the Ferguson kitchen but in states all over the country as the fungi is rare, hard to find and has a season of only a few weeks. 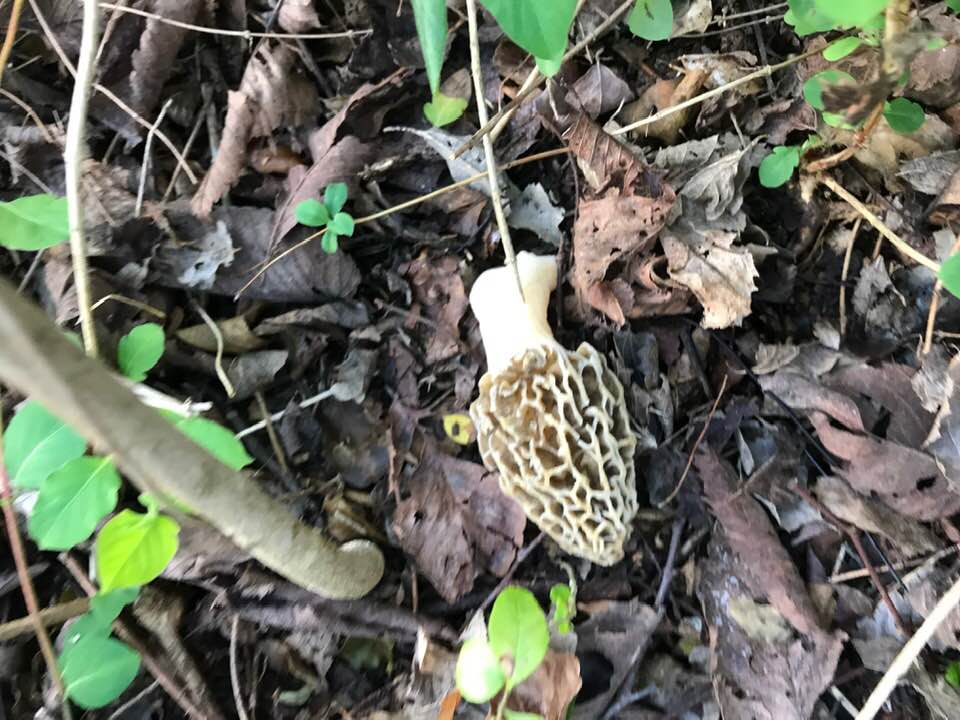 Morel season only lasts a few short weeks in early April to mid-May, depending on the area of the hunt. It had not quite started in Ferguson’s home town of Tompkinsville but is well underway where he currently lives (and travels to hunt them) in the Tennessee, Alabama and Mississippi areas.
In the past few weeks, he has been gathering them up and posting pictures of his treasures on Facebook.

The United States Army Veteran and retired General Motors employee has been hunting mushrooms most of his life from growing up in Tompkinsville, to his years spent living in Indiana and Tennessee. He has been on trips bringing home over 200 and had times where he only saw one or two, while sometimes his work left him completely empty-handed. He has found Morels all over the country, ranging in all sizes. 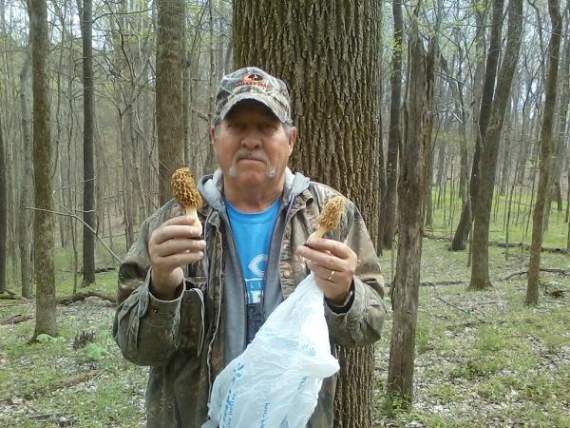 His hikes through the woods, usually along a scenic parkway near his home, have found him many items such as glassware from the 1930s and an old saw blade that he carried for miles out of the woods to take home and restore. He shared those items with his family who were visiting from Tompkinsville, when they arrived at his home in Culleoka, Tenn., just two nights before he planned to take them hiking. 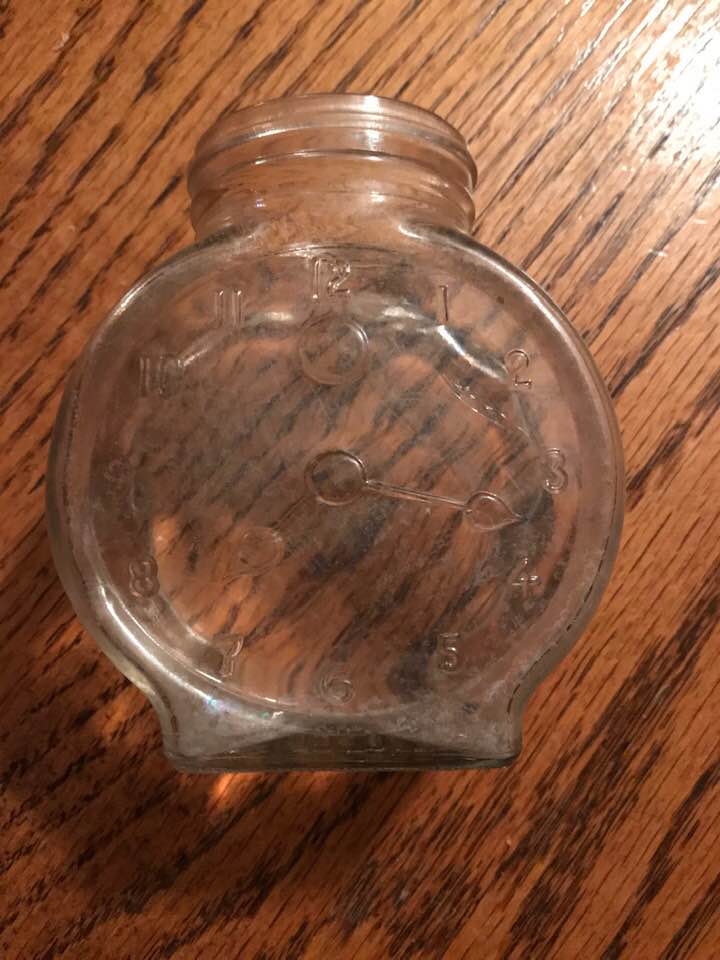 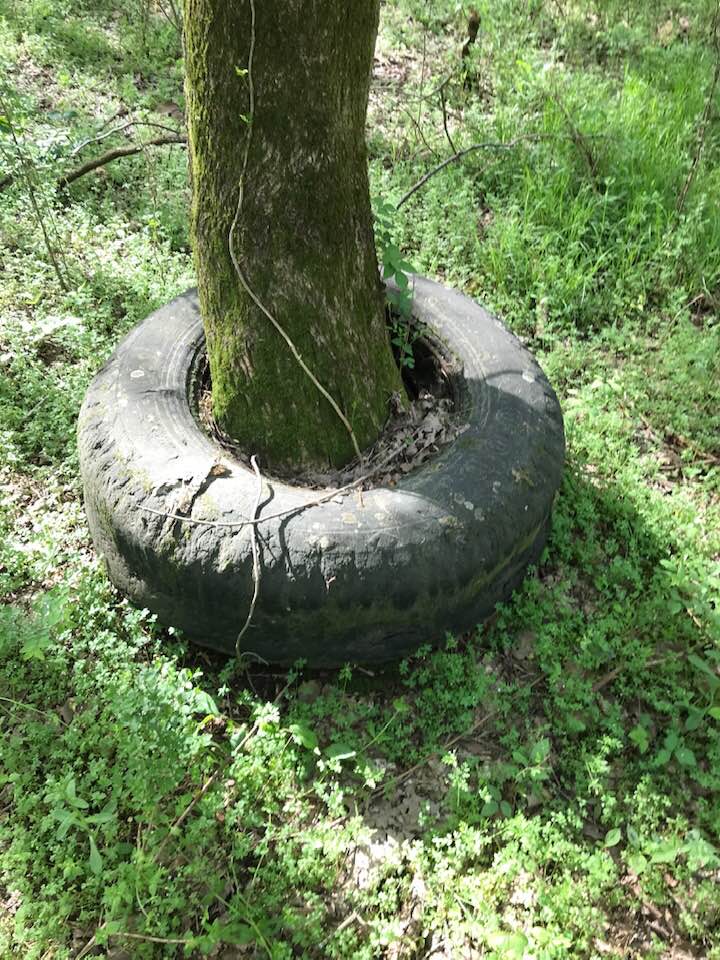 Many friends and family from all over the country, but especially in Monroe County where Ferguson grew up and still visits regularly, posted envious replies to his posts, some asking for a share and even a few offering to buy a “mess” or a batch of mushrooms. He is not only known via Facebook for his abilities in the mushroom field but all over the South in areas he has hunted, making friends along the way of those who love the culinary wonder and those who have never heard of it. 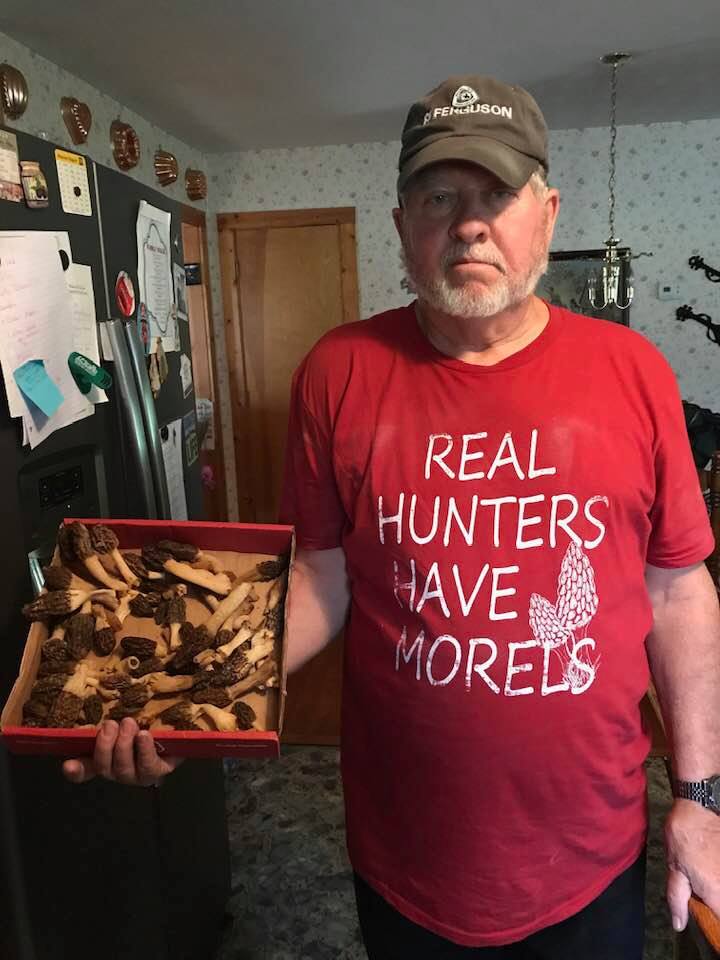 His family had been teasing him about the fish he had been posting pictures of via Facebook for the past few weeks. However, they had no idea of the plans he had for them. Ferguson, unbeknownst to his guests, had been preparing for this day for a while and he couldn’t wait for Friday evening to surprise them. He woke up the first thing that morning, and with the help of his wife, Brenda, pulled out the mess of fish he had been hunting and stashing back. 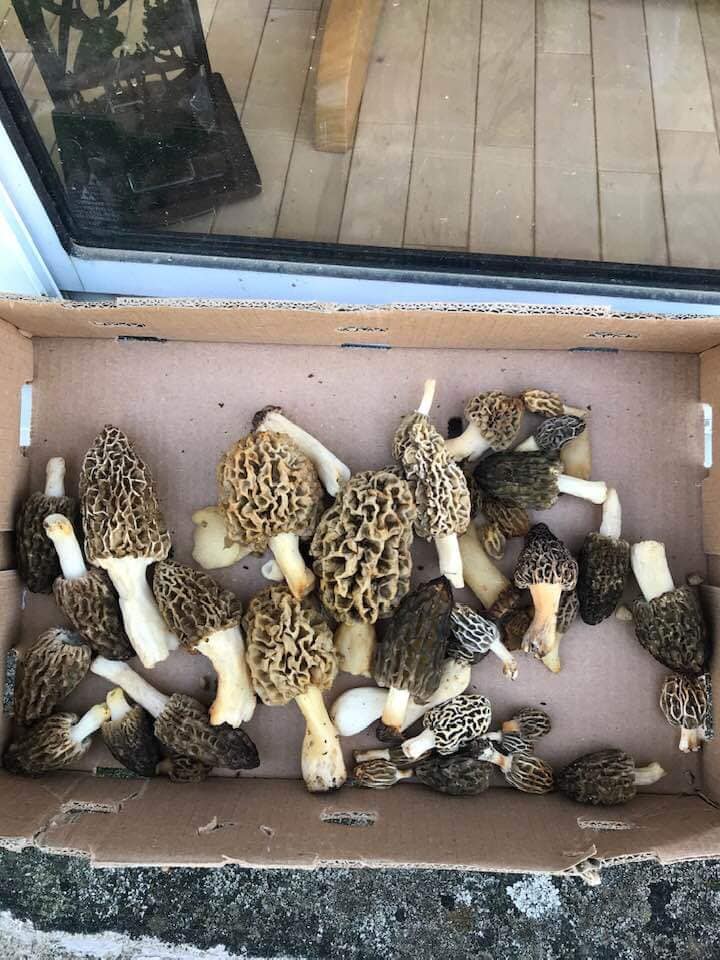 The wondrous smells coming from the kitchen quickly awoke the children who ambled into the room one by one to watch in mouth-watering anticipation as their “Papa Tommy” stood over an iron skillet of hot grease and their “Nana Brenda” prepared an egg and milk mixture. Could they be dreaming? 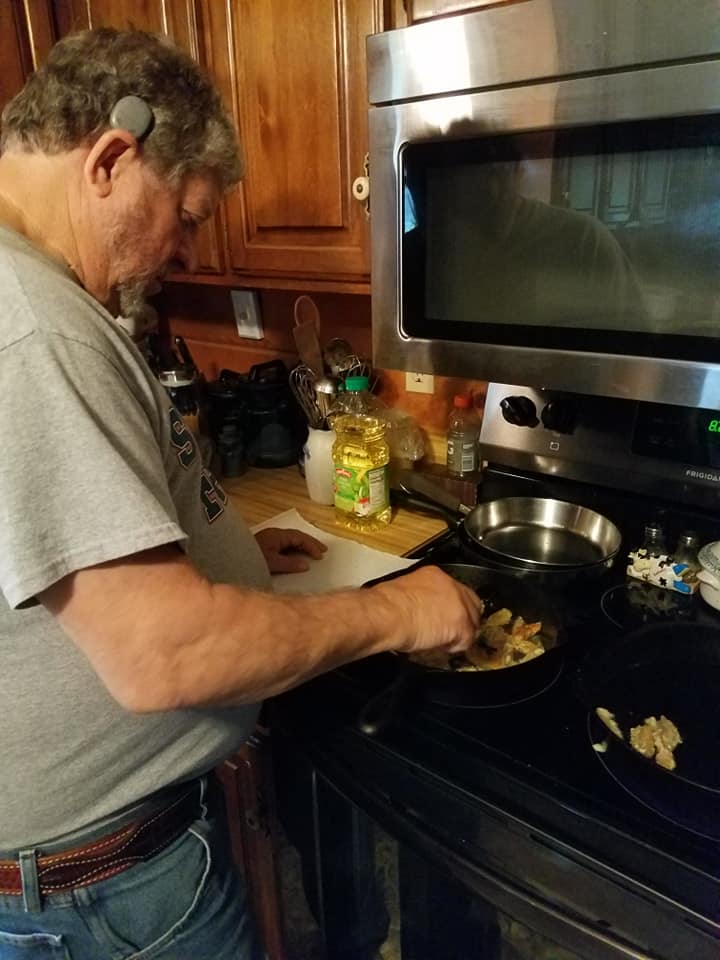 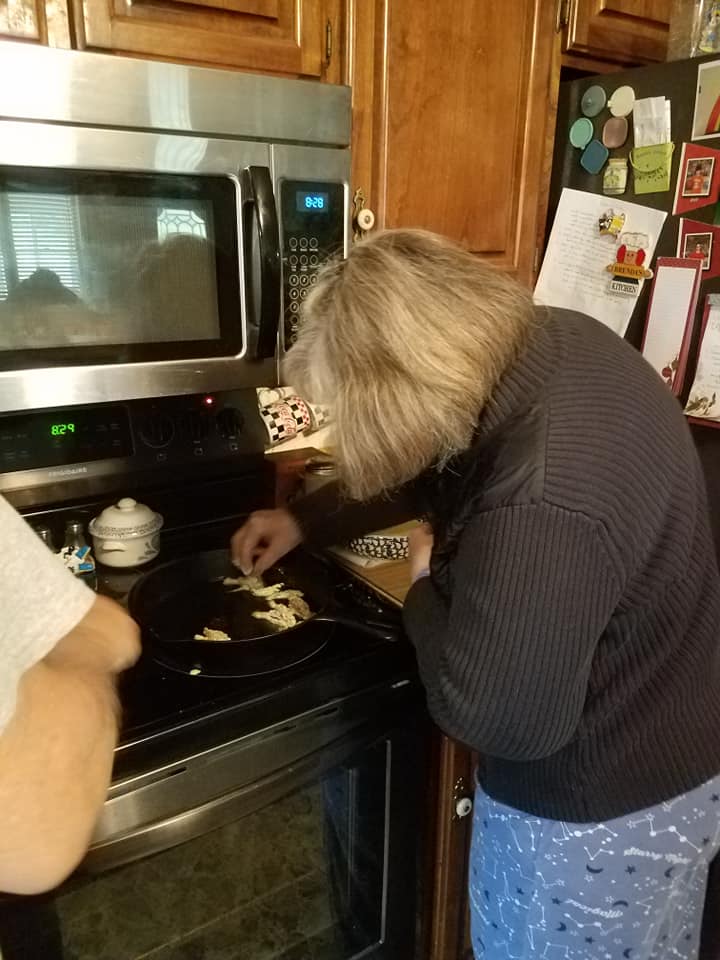 Brenda placed each fish in the mixture and then shook them in a corn meal breading, before passing them to her husband, who placed them in the hot oil to fry for just a few minutes, before removing them to drain onto a plate lined with paper towels. 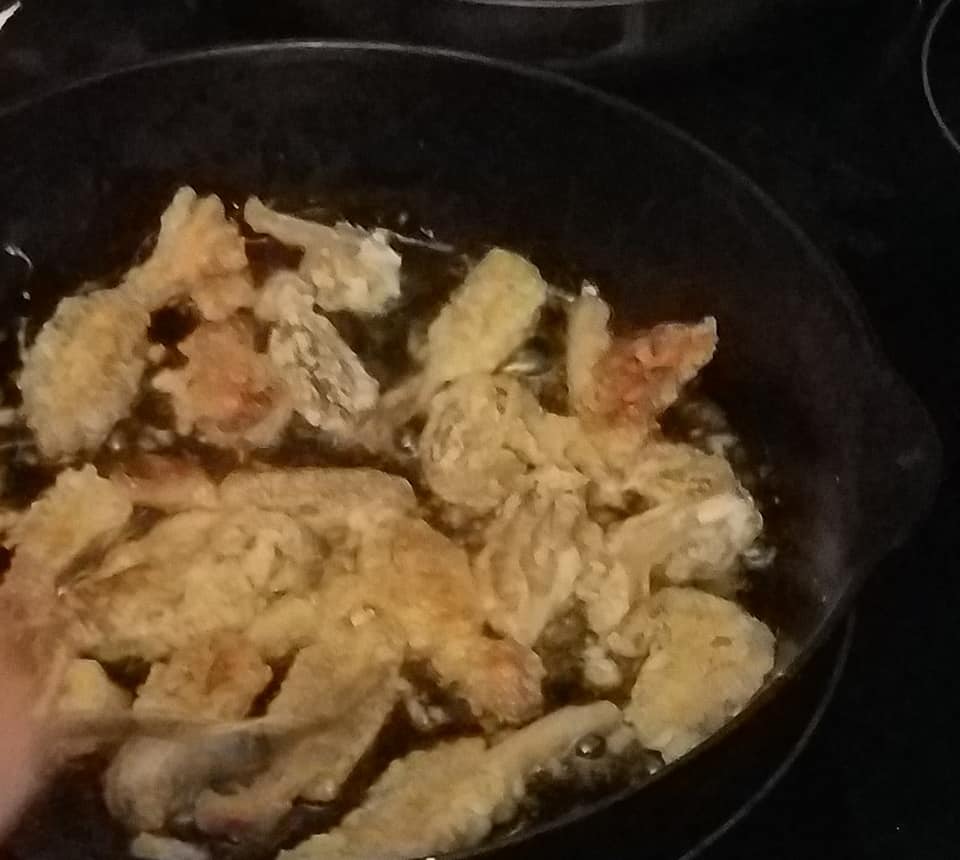 As the fish finished frying, she scrambled a few eggs to go along with them as Tommy instructed his niece to make toast. The kids sat the table for breakfast, and everyone finally gathered around to enjoy the season’s first taste of dry land fish.

The Morels that he prepared for his family featured mushrooms gathered from as far away as Alabama, Mississippi, and as close as his son’s back yard in Culleoka, Tenn.It takes several of them to make up a “mess” and it usually takes more than one trip to accomplish that.
Most were gathered closer to his home, along the Natchez Trace Parkway, a 444-mile scenic drive through three states: Tennessee, Alabama and Mississippi. This is his favorite hunting area, but he notes a true hunter will never give away his exact “spots.”
He discussed those spots as he watched his family clean their plates, grabbing up a few and placing them aside, as promised for his daughter, who had also drooled over the pictures boasting the fish in sizes from the tip of a fingernail to a few almost as big as a can of cola. 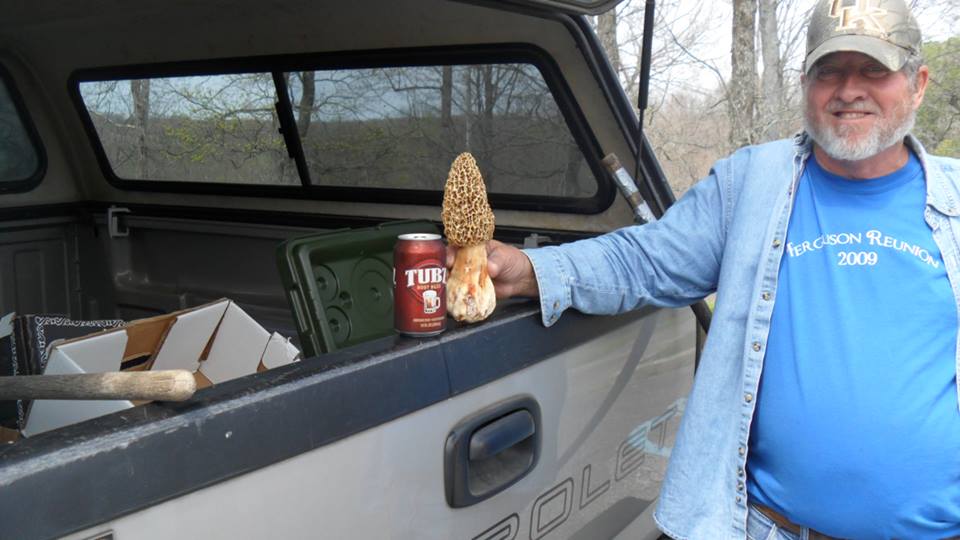 He listened as the family told him how they hated to gobble up all of the gains of his hard work and then watched their eyes pop in amazement as he offered one to his dog, Zoe. The “mushroom whisperer” laughed and told them not to worry, that he knew where to find more.
While Morels are sold online at eye-popping prices, Ferguson notes that if adding his travel cost, hours in the woods and the work of hiking miles on end to find these delicacies, it would make them priceless. He did not mind sharing a few over breakfast with his family, but admits it is frustrating that so many ask for a share so offhandedly.

He says that he is impressed by those who offer to buy them, including a teacher back home in Monroe County who saw his posts on Facebook. Although, normally generous by nature, he says it can be frustrating that people do not consider the work that goes into his favorite “hobby.” It is a lot more work than people realize, which is why the Morels bring a high dollar online.

The mushroom hunter can tell you pretty much anything you ever wanted to know about Morels. Not all mushrooms are the same and, with many being toxic and some fatal, it is best for novice hunters to venture out with an experienced hunter. Ferguson has developed quite the eye for the fungi over his 60 some odd years of mushroom hunting.

As he shared stories with his family, he told them, “I am going hunting tomorrow and any of you are welcome to go, but there are some rules you have to understand.” He continued, “It will be a very long day and I will not deal with any whiners. We will leave here at 7 a.m., on the dot. It is an hour drive there and an hour drive back, and we will be in the woods at least 7 hours.”

Ferguson, who tells things exactly as they are and never minces words on his standards told his family, “We can pack a few snacks, but I am telling you, we will not stop for at least seven hours and,” he paused and glanced at his niece, “I mean it. I will not listen to whiners. It’s a rough trip so don’t go if you don’t think you can handle it.”

At this, his wife laughed “I’m not going!” While she joked, Brenda has been on many trips with the mushroom whisperer over the years. However, her enthusiasm for the hunt has waned as she has gotten older, while his has only grown more by the year. She says she just doesn’t have it in her anymore for the long days of hiking, but she is always ready and waiting for him to return home and hear of his exploits.

As everyone laughed, Ferguson glanced around and asked who was up for the task. His niece quickly realized that maybe a hunting trip in the woods was not the best place for she and her daughters, as she reminisced on many hunting expeditions with her uncle and father as a child. She knew she was one of the “whiners” he mentioned.

However, two brave men stepped forward and accepted the mission, ones who would accompany Ferguson on the trip in the hopes of finding even one or two mushrooms. After all, even if you only find one, most people will tell you they will treasure it and bring it home, fry it up and savor it as if it were the last one on Earth.

Bright and early Saturday morning the men loaded their truck with a cooler of snacks, sandwiches and tools of the trade for finding mushrooms – good eyesight, walking sticks, bags to transport their loot and a lot of patience. They left out without cell phones or other modern technology, to bond over several hours in the woods, not knowing if they would come back empty handed or have more than they could carry.
Ferguson shared many tips for finding the Morels along the way. From places to look, which trees to search near, how to get down on the ground and dig back leaves to reveal them, to how to spot real Morels and not pick anything poisonous. The trio hiked over 20 miles that day, coming across deer, snakes and other wildlife along the way. 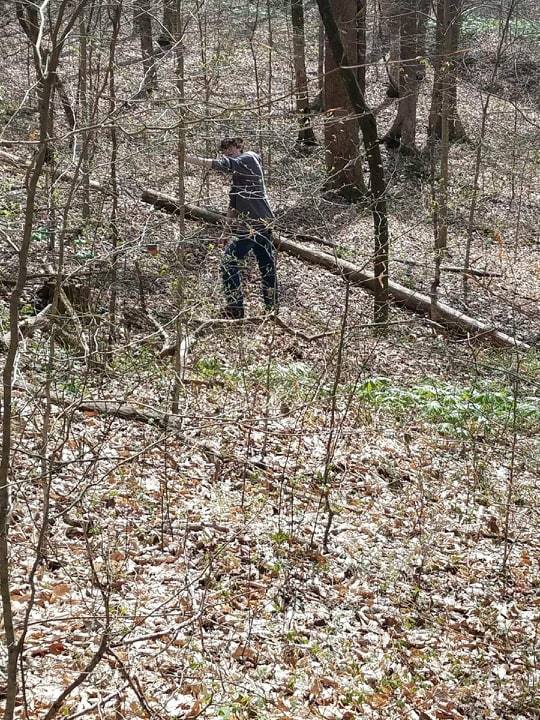 At the end of their adventure, they came home with 45 mushrooms. The younger two were exhausted and amazed at the energy of the almost 71-year-old “mushroom whisperer.” When asked would they go back, they laughed and shook their heads saying they were not sure they could handle it again. Ferguson just laughed as he said, “I told you so!” 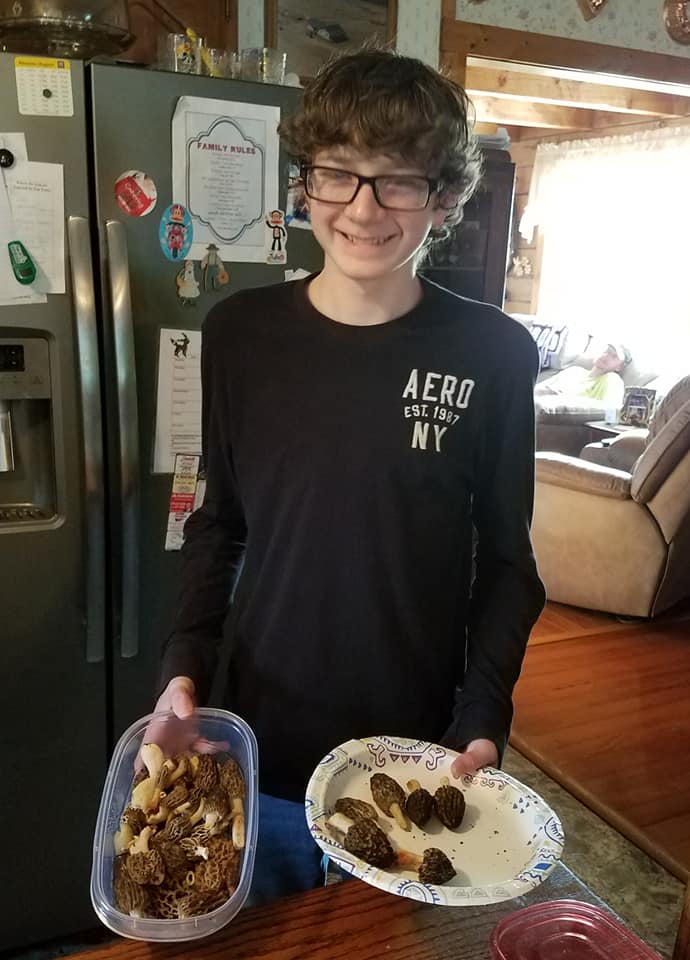 Ferguson closely guards his 60 some odd years of knowledge but does offer up a few tips for beginning enthusiasts. If you are interested in mushroom hunting, if you have either never been or have been many times without much luck, Ferguson notes that with a little hard work and patience you can become an expert in the field, just as he has. Watch the weather for those cold nights turning into warmer days and short bursts of rainfall; when the sun pops out, it is time.

Wear comfortable shoes, light clothing and carry bug spray. Search in damp areas near fallen dead trees or around logs. Be careful of snakes or other dangerous wildlife. Do not be afraid to get down on the ground and pull back leaves and other vegetation to reveal the fish and do some research to make sure that you are not eating anything toxic. It’s best to ask an experienced hunter to guide you on your first few trips.

Ferguson wishes all his friends and family in Monroe County “Happy Hunting and good luck,” as the season begins in Kentucky, saying “Remember, patience and hard work is the key to a good season.”

And the “Morel” of the story?

The older gentleman has a lot to teach the younger generation, not just about dry land fishing, but also about life (after all, the two go hand in hand). If you want something rare, you must know how bad you want it and what it will take to get it. Patience, time, and a lot of hard work will get you a priceless treat at the end of the day, but you have to be willing to put in the work, and, as he mentioned several times… not whine.